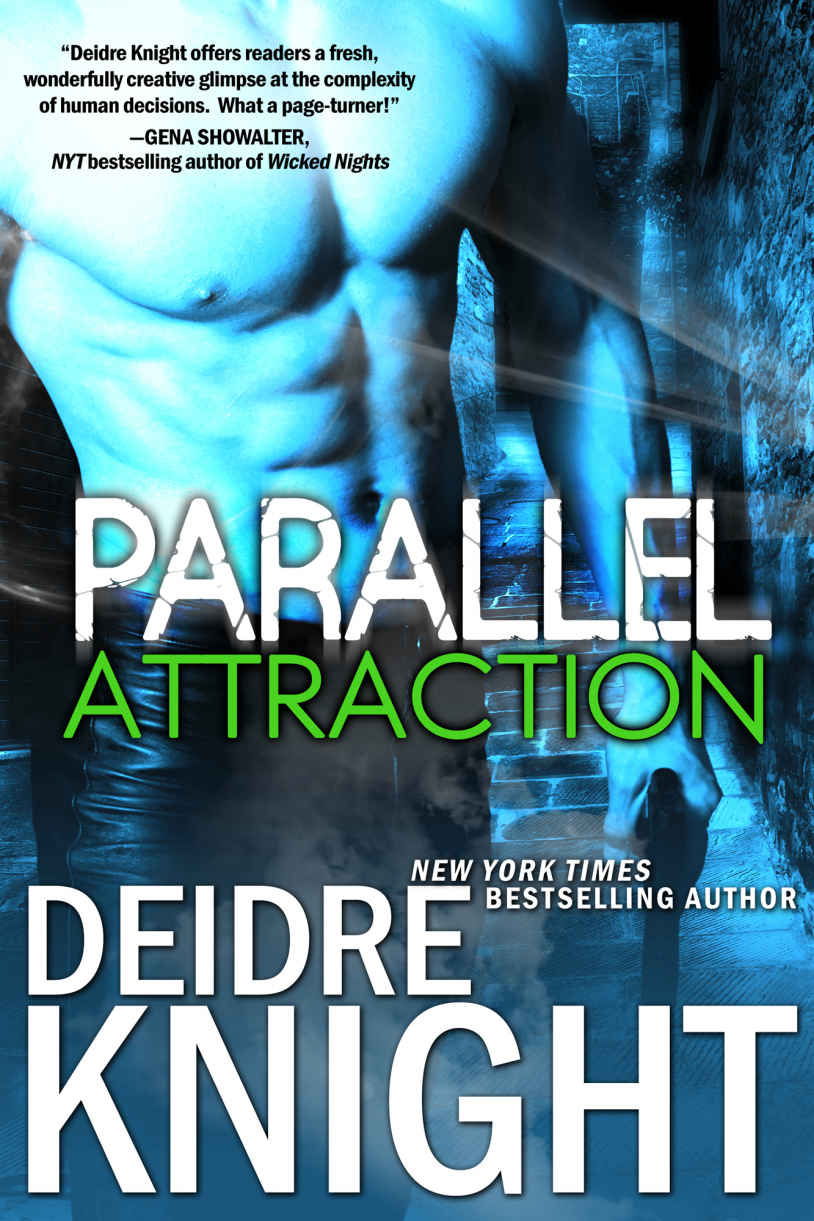 Finding a mate is the farthest thing from alien warrior Jared Bennett's mind. After years of exile on Earth, he's almost developed a time travel weapon. One that will hopefully bring peace to his own people. But a chance encounter with scientist Kelsey Wells ignites a scorching desire that overshadows his people's war. To Kelsey, Jared's heritage is exotic and alarming - nothing like the logical, scientific facts of her own world. But despite her fears, she can't deny the heated response of her body every time the magnetic leader comes near. When an enemy from the future arrives, Jared realizes that his desire to mate with Kelsey may destroy them all.

Surely he can't bond with her--not now, when his doing so might destroy not only his own world, but Earth, as well. The lovers face one inescapable fact: Time can save them, as much as it can destroy them…

"...humorous...heart-wrenching...compelling.... What a page-turner!" - Gena Showalter, author of The Darkest Craving. 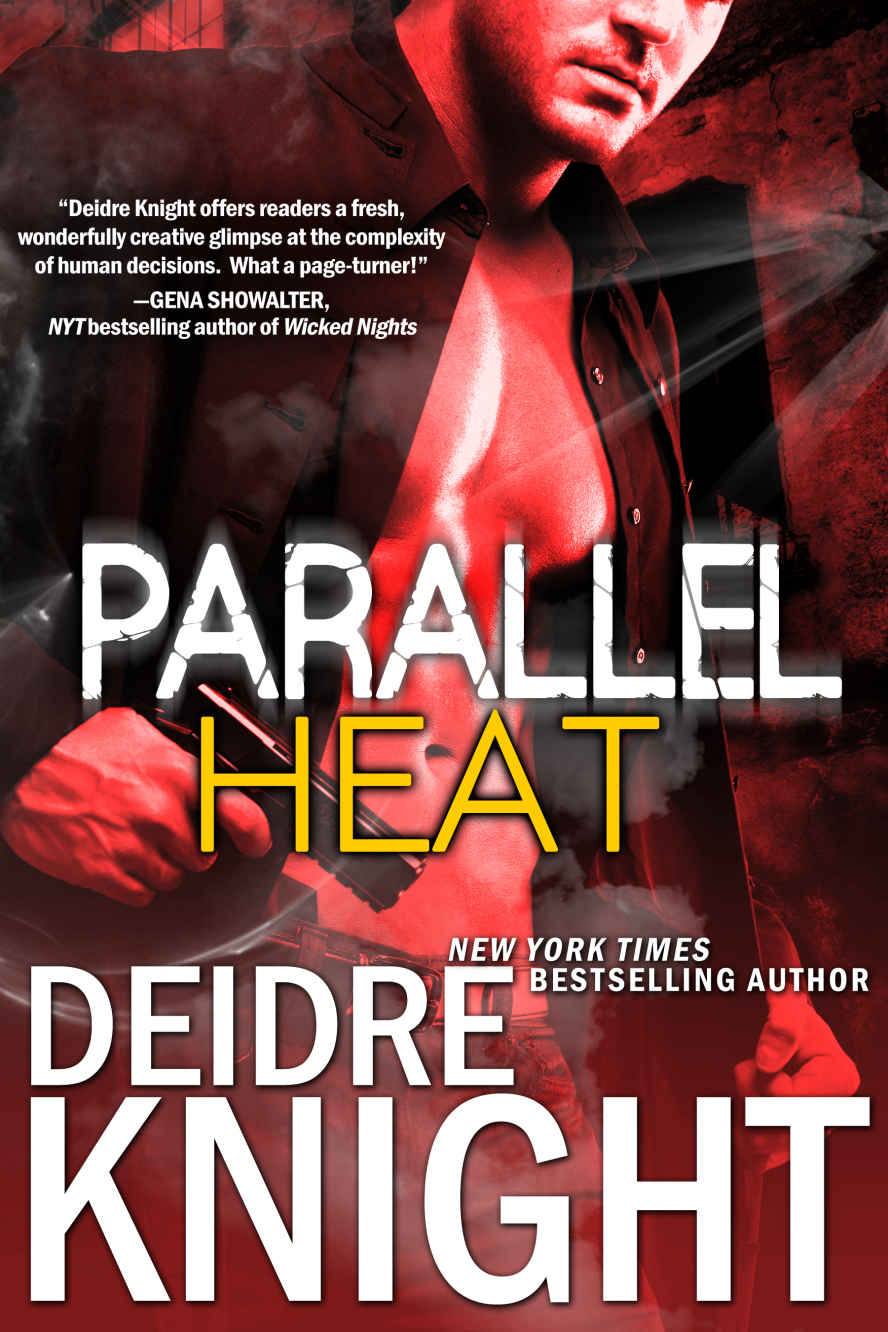 Lieutenant Thea Haven is still heartbroken that her king, betrothed to her since their youth, chose a human as his lifemate and queen. As warrior-tough as she is beautiful, Thea is unsure whether any other man will ever awaken her again...until she encounters royal guardian Marco McKinley. With secrets as forbidden as his powerful sensuality, the king's brooding protector quickly takes command of Thea's darkest fantasies and casts a hypnotic spell over her body and heart.

New York Times bestselling author Deidre Knight is back with an electrifying follow-up to the highly acclaimed debut of her Parallel series. War has a way of breaking everything...especially your heart and the rules of attraction.

Years ago Marco was pledged to protect Jared Bennett, his people's king, now living in exile on Earth. Here, in a world that's alien to them all, a secret war between human fighters and otherworldly rebels is growing hotter every day. But Marco lives in fear not of this epic war, but his own future destiny: He has been warned that he will turn traitor, and his love for Thea Haven will be the direct cause.

Now Marco is faced with the ultimate choice - break his vow to his king or lose the woman who has claimed his mind, body, and soul for her own. One of those choices could mean the destruction of them all. 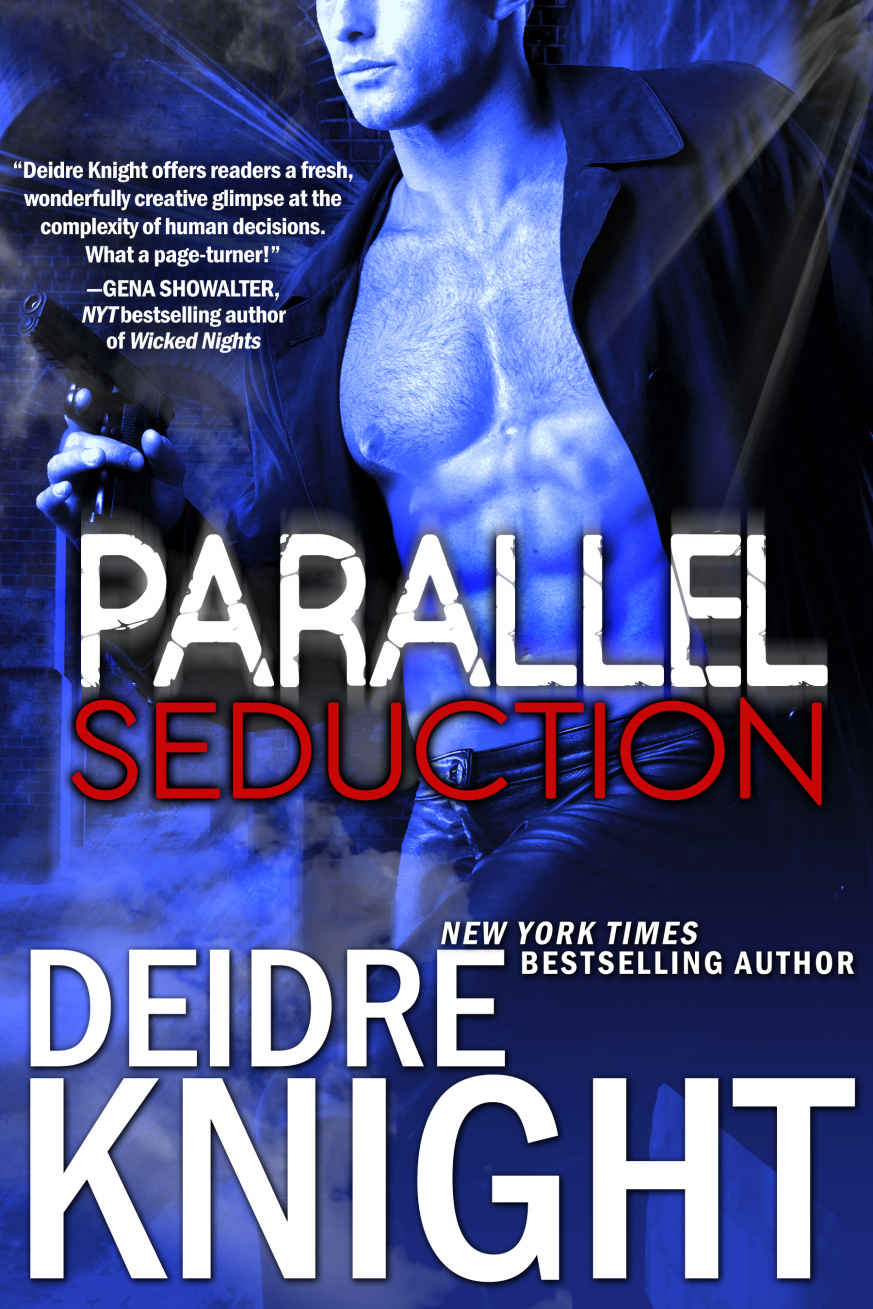 Lieutenant Scott Dillon isn't an overly complicated man--he has a rebel military operation to command and alien enemies to battle. But he also must cohabitate with humans in the middle of his unit's temporary home in remote Wyoming--humans who suddenly interest him on a much more personal level than ever before. Well, one human has enticed him, to be more precise: a female FBI linguist who not only speaks his native language, but managed to save his life in one of the worst fire fights he ever experienced--despite also being blind. That she's beautiful and alluringly sensual only arouses his interest even more.

Now, Hope Harper is trapped in the middle of Scott's own rebel camp, and he's not sure if he should broker her return to the FBI, or keep her safe behind the walls of their compound. The only problem is that a man has arrived from the future, a trespasser with a maddening desire for Hope. A man who seems to have an agenda of his own...one that includes making Hope his own lover, even though he's enemy to both human and Refarian alike.

As their mutual enemies close in and Hope wrestles with her burning attraction to both men, Scott must decide whether saving Hope will mean sacrificing whatever future he might have with her.

"You can always count on Knight to take an intriguing plot and bend it like a pretzel. This fascinating series is extremely intricate with its competing timelines and complex character growth. There's never a dull moment in this terrific series!" - RT BOOKreviews, 4-star Review 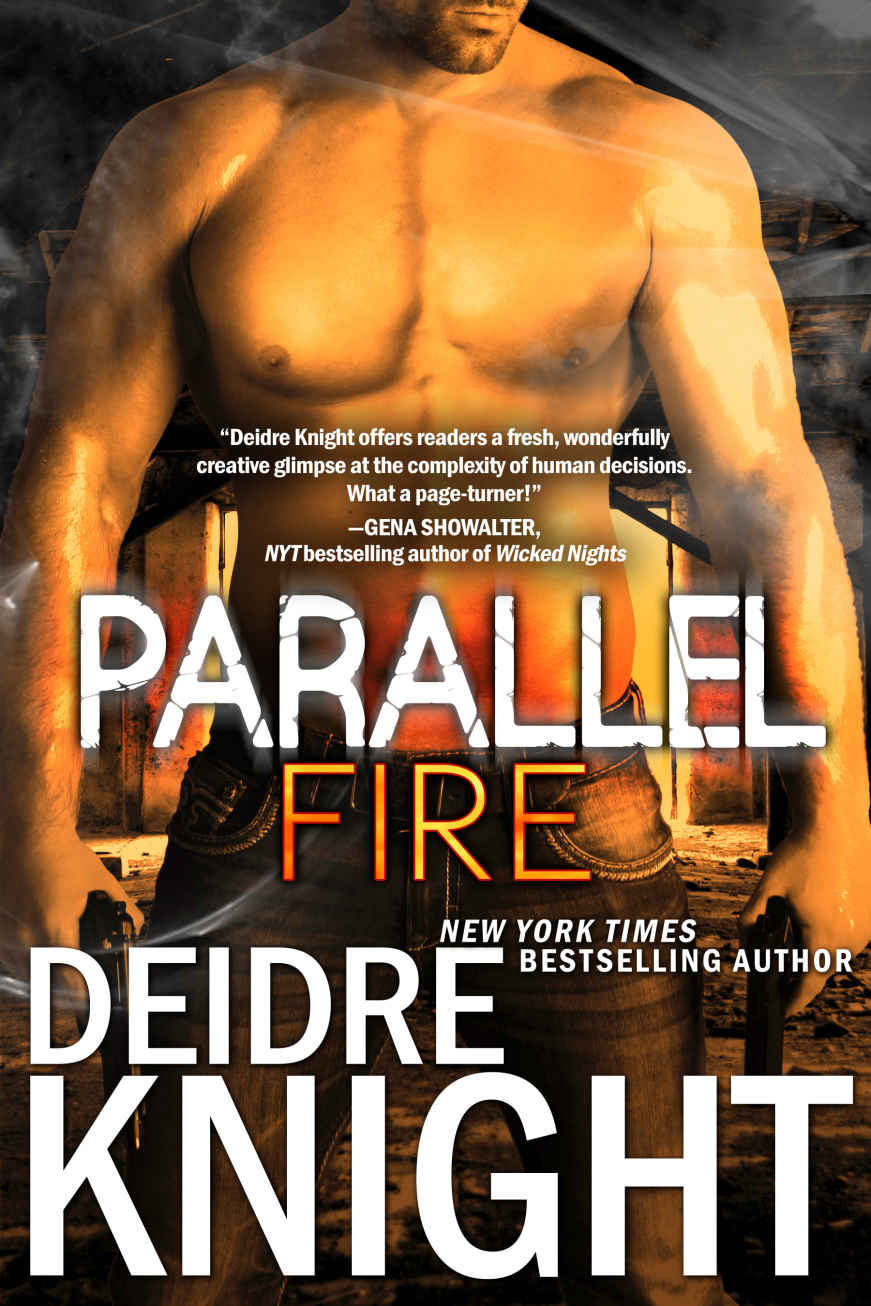 Anna Draekus has harbored a shadowy secret all her life, one she’s spent years concealing from her king and fellow military officers. Anna belongs to an elite, underground guard, charged with protecting the royal family at all costs. But when her superior officer Nevin Daniels uncovers her membership in the clandestine group, she finds herself in treacherous territory. A place where attraction and temptation overrule everything else, including her loyalties. Lieutenant Nevin Daniels can’t help but fantasize about his beautiful fellow soldier—nor can he resist Anna's unselfconscious sensuality. Still, he's her superior officer and maintains a cool reserve, remaining emotionally aloof until a routine patrol changes everything.

When an unexpected incident leaves the pair marooned deep in the backcountry, Nevin’s long-restrained desire threatens to grow dangerously unleashed. Especially once ritual mating fever overtakes Nevin, overpowering him--and making him aware of what he's always denied. His intoxicating attraction and need for Anna. Secluded together in the wilderness, and with Nevin in the throes of mating heat, they awaken desperately to each other. Will they enter the primal mating cycle together and bond, no matter the cost? After all, what happens in the back country of Wyoming stays in the backcountry of Wyoming….or does it?

When Jake Tierny traveled back in time to stop a traitor, a twist of fate rendered his mission unnecessary. Now, he's stranded in his own past, with a woman who has always been his biggest weakness: FBI linguist Hope Harper. Hope was his wife in the future he left behind--but was murdered before giving birth to their unborn baby girl. Now she's alive, but loves another man: Lieutenant Scott Dillon, a man Jake has far too much in common with for the three of them to comfortably co-exist in this world and time.

Jake determines to absolve himself over past guilt and grief by setting out on a mission to destroy the man who murdered his family. No way can a man with so much blood on his hands deserve to love again, so Jake shuts himself off to the only other woman who has ever sparked his interest--medic Shelby Tyler. Even the thought of noticing another female feels like yet another betrayal, so Jake leaves the comforts of the Refarian camp--and risks disrupting the entire universe in the process.

Shelby Tyler knows a thing or two about incredibly stubborn, self-destructive men. She's spent enough time on Earth to have experienced her own share of heartbreak, but Jake's melancholy eyes and sensual ways awaken something she, too, thought might be dead in her own heart. So when her king sends her to Texas in search for Jake, she has ulterior motives that transcend her official assignment. Finding a heartbroken Jake drunk and brawling at a bar, she embarks on a new mission: to heal his wounded heart.

At Shelby's refusal to be shut out, Jake begins succumbing to his long suppressed passion. But Shelby has a broken past of her own, and when the truth of the murder and their enemies emerge, both must try to awaken a part of their souls they thought were lost forever.

"This intriguing (and final) novel ... is absolutely fantastic. The character building is artful and fresh with a blend of sci-fi action and romance." - Mandy Burns, Fresh Fiction